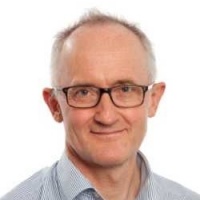 He has a great interest in the epilepsies, ketogenic diet, tuberous sclerosis, microcephaly, movement disorders and efficient investigation of children with neurogenetic disorders.

He holds an associate lectureship at the University of Cambridge, leading in the training of under-graduates, junior and senior doctors. He was inaugural Chair of the BPNA education committee and National Training Advisor in Paediatric Neurology 2013-17.

His research interests include the epilepsies, genomic disorders and quality of life.

He has benefitted greatly from the support of children, families and patient organisations, with which he collaborates closely in Cambridge, East Anglia, across the UK and internationally.