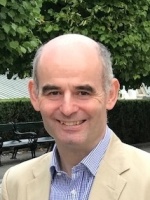 Finbar initially graduated from Oxford with a BA (Hons) in Modern History in 1983 before going on to study medicine at Bristol Medical School, graduating in 1990. He worked as a junior paediatrician in Bristol, Bath and Birmingham before undertaking a Fellowship in Neonatology at the Hospital for Sick Children in Toronto, Canada. On returning to the UK, he was awarded a Wellcome Trust training fellowship in clinical epidemiology, completing an MSc in Epidemiology at University of London and Diploma of London School of Hygiene and Tropical Medicine, before working with the MRC Environmental Epidemiology Unit in Southampton. This was followed by appointment as Senior Clinical Research Fellow at the National Perinatal Epidemiology Unit, University of Oxford where he ran the Oxford Registry of Early Childhood Impairment (ORECI). He was awarded his PhD in Clinical Epidemiology from the University of Bath in 2002. Finbar completed his paediatric neurology training in Southampton and was appointed Consultant Paediatric Neurologist in Bristol in 2003 before moving to London in 2013. Currently his clinical work is based predominantly at Great Ormond Street Hospital but he continues to run the supra-regional tuberous sclerosis clinic in Bath.

Finbar’s research has been in the area of neuroepidemiology and clinical trials. He has particular clinical and research interests in infantile epilepsy, tuberous sclerosis complex and stroke.

His PhD was a study of the epidemiology and natural history of Tuberous sclerosis complex. The thesis highlighted the relationship between early onset epilepsy, brain pathology and cognitive function. He has recently acquired funding for the longer-term follow-up of the population-based sample of TSC cases initially identified in his PhD.

His epidemiological study of the outcome of childhood stroke (SOCS) funded by the Stroke Association, was the first epidemiological study of stroke incidence and outcome in the UK. As well as recording an accurate incidence rate, it also described the morbidity, risk of recurrence and mortality related to childhood stroke in the UK. He is a founding member of the International Paediatric Stroke Study (IPSS), which has been led by Professor Gabrielle Deveber from Toronto.

He is Chief Investigator of the International Collaborative Infantile Spasm Study (ICISS). ICISS is the largest study of infantile spasms yet undertaken. It has shown that combination therapy of hormonal treatments (prednisolone or synthetic ACTH) and vigabatrin is more effective at stopping spasms than hormonal treatment alone.

He was also Chief Investigator of the NIHR funded multicenter randomized placebo-controlled trial of the mTOR inhibitor, Metformin in tuberous sclerosis complex (MiTS). This trial has demonstrated that Metformin reduces the volume of intracerebral hamartomas (Sub-ependymal Giant Cell Astrocytomas) and seizure frequency in tuberous sclerosis complex.

He is currently developing trials to investigate the use of cannabis based medicinal products in refractory early-onset epilepsies and genetic generalized epilepsies.

He is a past Secretary of the European Paediatric Neurology Society. He is a passionate Manchester United supporter and an enthusiastic, if not necessarily competent, ski mountaineer.