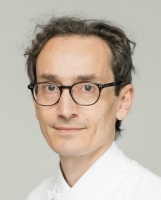 Professor Tom Solomon is Chair of Neurological Science at the University of Liverpool and Director of the National Institute for Health Research (NIHR) Health Protection Research Unit in Emerging and Zoonotic Infections.

He studied medicine at Wadham College, University of Oxford, before undertaking a PhD on central nervous system infections in Vietnam with a Wellcome Trust Advanced Training Fellowship. He had a Wellcome Trust Career Development Fellowship and a Medical Research Council Senior Clinical Fellowship before becoming Chair of Neurological Science at the University of Liverpool in 2007. In 2010 he was appointed founding Director of the University of Liverpool’s new Institute of Infection and Global Health. In 2014 he was made Director of the NIHR Health Protection Research Unit in Emerging and Zoonotic Infections, which played critical role’s in the UK response to the Ebola, Zika and COVID-19 public health emergencies. He sits on the UK Government’s Advisory Committee on Dangerous Pathogens, and the Medicines and Healthcare products Regulatory Agency (MHRA) Expert Working Group on Covid-19 vaccines.

Professor Solomon heads the multi-disciplinary Liverpool Brain Infections Group, which works to reduce the global burden of neurological disease caused by infections, supported by more than £50 million in research funding. The group has played a major role in the control of Japanese encephalitis across Asia and studies encephalitis, meningitis and other UK brain infections through the BrainInfectionsUK.org portfolio, which Professor Solomon leads. The group has major programmes on neurological Covid-19 disease in the UK and globally.

Professor Solomon is an also honorary Consultant Neurologist at the Walton Centre NHS Foundation Trust and the Royal Liverpool University Hospital. He is an enthusiastic teacher, establishing the annual Liverpool Neurological Infectious Diseases course in 2007, which has now trained more than 1000 doctors from 37 countries. His awards include the American Society of Tropical Medicine and Hygiene Vincenzo Marcolongo Memorial Lectureship (2003), the Royal College of Physicians triennial Moxon Medal (2014) and the Wolfson Memorial Lecture, University of Cape Town, (2020).

Professor Solomon is a strong supporter of women in science, and a passionate Science Communicator. He won a Guinness World Record for running the fastest marathon dressed as a doctor (2010), and another for his Sci-Art project The World’s Biggest Brain. His popular science book Roald Dahl’s Marvellous Medicine was published in 2016, followed by a linked family show at the Edinburgh Fringe Festival, 2017. He hosts the Scouse Science Podcast, and tweets @RunningMadProf.